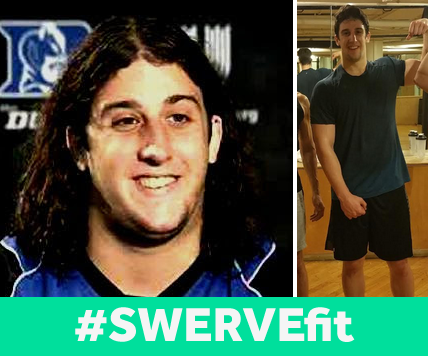 A lifelong athlete who played football at Duke and in the NFL, Cameron Goldberg’s fitness goals were always focused on and measured by his performance on the field, the court, and the track. His primary goal was to improve his athletic performance while adding weight and mass. Clocking in around 285-305 lbs (depending on the season), Cam was maintaining the weight an offensive tackle needed to push his opponents around on the field.

Since then, Cam has lost 80 pounds and has shifted his focus from muscle mass and performance on the field to a goal of having healthy, more well-rounded lifestyle. But as an athlete through and through, he still seeks competition in his workouts.

“You can stop playing sports, but the desire to compete and challenge your mental toughness never goes away.”

Cam found that the team-based concept at SWERVE created an environment where he could not only work together with others but that the workouts challenged him in the that way he craved. This was a perfect match for Cam’s fitness and lifestyle goals, and there are few riders who take sprints in class as seriously as this guy.

“I legitimately STARE DOWN those scoreboards throughout the ride to make sure I am pushing myself and my team.”

He was hitting his stride in post-college fitness. Then last year, Cam developed a pain in his right shoulder. It eventually became so severe that it prevented him from even pulling a shirt over his head. When discussing his options with an orthopedist, he was given the choice between an end to the athletic activities he loved or undergoing surgery on his shoulder.

Giving up on exercise wasn’t even a consideration for Cam. So after scheduling his surgery for December of 2014, his priority was to figure out how he could get himself back in the game as quickly as possible.

“The recovery is all I thought about! Before you start thinking I'm crazy, it’s not just the loss of exercise, but it's the disruption of routine and that time of the day I get to be either alone with my thoughts, or with like minded people.”

By being in constant communication with his surgeon (nagging, persistence… whatever you want to call it), Cam was perpetually balancing his desire to move forward with the risk of pushing too hard. There was a long road ahead but Cam remained focused and optimistic.

In addition to rehabbing his shoulder, Cam was determined to regain his physical fitness. He surrounded himself with other athletes who were each on a personal fitness journey, which was a huge motivator for Cam to set, track, and achieve his own goals. He became a regular in the Wednesday morning 6am ride and popped up in several classes throughout the week.

“SWERVE was no doubt the biggest piece of the puzzle when it came to getting back into shape…. Having the data element to track progress aligned perfectly with the goals I pursued, and helped me quantify weekly progress. It was a place that was safe for my shoulder and it pushed me in a way I had not felt in a long time.”

Watching Cam in a workout today, you’d never know that he’d had surgery just 6 months ago, and you’d definitely never know that he used to be 80 pounds heavier. In fact, you’ve most likely seen him around the studio with a huge smile on his face after leading his team in sprints all class. We’re honored to have been a part of Cam’s fitness journey and his injury recovery, and are even happier that he’s a regular at the studio, coming to class and crushing it every time.